My last visit to Berlin was in 1976 – before the Berlin Wall came down, and at a time when the city was a very somber place. Has much changed? Absolutely. There is a fantastic energy about this city, where old meets new and historic buildings that have stood for hundreds of years adorn the skyline amid new centres of business and commerce.

The city’s iconic landmarks remain of course, with Check Point Charlie, the Reichstag and the Brandenburg Gate representing vital aspects of Berlin’s history. But since the Wall came down over 25 years ago, the city has developed quickly, with a selection of beautiful new buildings bringing the skyline into the twenty-first century.

That said, I was struck by how green the city now is – it reminded me very much of London with its unexpected swathes of open parkland and tree-lined avenues. I circled the Tiergarten, walking for three hours around this huge area of lakes and woodland reminiscent of Hyde Park, and I was really amazed at how quiet and green it all was – it’s easy to forget you’re in the heart of a city of some 3.5 million people.

Berlin has also become a wonderful, culturally diverse city over the past few decades. My taxi driver Mustafa shared with me how 8% of the population was now made up of fellow Turkish immigrants, many of whom had come to Berlin for just a short working stay but had ended up staying some 20 years.

Mustafa very much epitomised the people I met in Berlin: friendly, welcoming and full of love for the city in which they lived. The stories of the city’s large Turkish population has been added to by many more migrants from a multitude of nations, with the high number of international students choosing to remain in Berlin after their studies being an important factor behind the city’s modern multicultural personality.

It’s taken over a quarter of a century to reach the point where Berlin is once again a thriving metropolis, but it’s hard to deny that the city has now grown far enough in stature to register as one of Europe’s top destinations.

The Wall is still visible in certain quarters, such as Friedrichshain, complemented by new landmarks such as the 02 Arena and a number of smart new apartment blocks that are home to the young professionals that have flocked to the area that was once the heart of East Berlin.

To discover more information about Berlin, visit our Berlin hub.

By night Berlin awakens, with popular areas such as Kreuzberg, Schoneberg and Mitte all alive with bars, restaurants and conversations in a dozen different languages. Jazz clubs are full of both locals and tourists sampling the atmosphere on early summer evenings. I went to Unter Den Linden and sat outside for traditional German Bratwurst, with mash and sauerkraut, complemented by a Berliner Pilsner – the perfect place to watch the world go by.

Berlin is now a hotbed of activity on the business front too, with Deutsche Bank, Alliance, Coca-Cola, PwC and KPMG all now represented. The Bank of China was also prominent and there are many Asian people working and studying in this educational centre of Europe.

From Potsdamer Platz to Friedrichshain, Charlottenburg to Tiergarten, Berlin has something for everyone, whether they’re looking for retail options or areas of unsurpassed historical interest. And either by foot, the efficient U Bahn underground train network, overland S Bahn, taxi, bus or trabi tour (an old East German car), getting around it all couldn’t be more simple.

As I boarded my flight to London, I was left with some great memories of my short trip to Berlin and I look forward to visiting this fantastic city again in the near future. One thing is for sure – I won’t be leaving it another 39 years before my next trip. 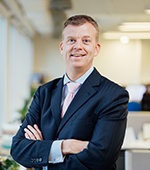 Director – South East Asia. Grant built his career in the UK as an independent financial advisor, working firstly for Prudential – where he met Tim Murphy, now CEO of IP Global, in 1993 – and then for Premier Financial Planning. He joined Tim at IP Global as Hong Kong Sales Director soon after the company’s founding, making him the business’ longest serving member of staff. Grant’s wealth of experience, both with IP Global and as an IFA, has allowed him to develop an extensive knowledge of the world’s property markets. In January 2010 Grant relocated to Singapore to build IP Global’s presence in this new market, and after much success he returned to Hong Kong in December 2012 in his current role of Director of South East Asia.